Drum roll please!!!!
It is the first official book review!

I am choosing to review the first "grown-up" book I read this year, The 19th Wife by David Ebersoff. 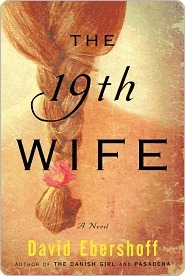 This book was originally published in 2008, so I am behind the times, but I hope you all cut me a break, since up until about a year ago, I worked in Youth Services, so most of what I read is either middle-grade fiction or Young Adult (which I will be reviewing quite a bit, by the way!).

I chose to read this though, because it is outside my reading comfort zone. 1) It's realistic fiction and 2) It's about fundamentalist Mormonism, which I know nothing about. So in I dove.

I have to say I was extremely pleasantly surprised.

First, you should all know that this is really two completely different stories that in the end tie together very nicely even though one takes place in modern times and the other takes place in the late 1800's. The first story begins with a murder - the main character of the modern story is a young man who has been kicked out of his fundamentalist Mormon community at a very young age. He learns his father has been murdered, and his mother (who is #19 of his father's many, MANY wives) is the main suspect.
The second story delves into the history of the earliest beginnings of the Mormon church in the USA and is told from the point of view of Anne Eliza, who would eventually become one of Brigham Young's many wives. Anne Eliza, a real historical figure, is extremely controversial among members of the modern Mormon church because she is credited for being the driving force behind the separation of the Latter Day Saints, who do not practice polygamy,  and the Fundamentalist Saints, who still do.
The story is able to smoothly transition between the two tales without creating those terrible shocks to the reader's system that can sometimes happen when jumping between worlds and characters. I personally found myself much more drawn into Anne Eliza's tale than the modern day story, but found them both enjoyable. I was, however, disappointed by the abrupt feeling of the resolution to the modern day tale. Overall though, it was the first book I have read in a while that really sucked me in from the very beginning.

Rating: 4/5 bookmarks for the unsatisfying ending.