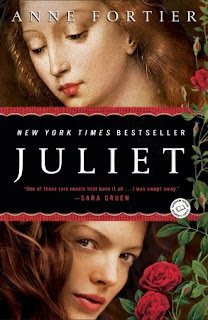 There is no one in the world of literature I love more than Will Shakespeare. That said, there is not one of his plays I loathe more than Romeo and Juliet. I was waiting for Juliet by Anne Fortier to be sappy, trite and gag-worthy. It really was none of those things, so I now take this moment to bow my head in apology to Ms. Fortier.
While there are some elements of the ridiculous about this story (sisters who have hated each other their entire lives patching up their relationship in about a half a page for example) it was thoroughly enjoyable! It was not so much a re-telling of Romeo and Juliet as it was a re-imagining of the story's origins. Julie, our protagonist, believes she is a descendant of the woman thought to have inspired the Juliet character. When the aunt who raised her after parents deaths passes away too, Julie thinks she is going to inherit a fortune. But, as it turns out her vile sister gets the pot of gold, and all Julie gets is a mystery that takes her back to her ancestral homeland of Sienna Italy. The story she uncovers completely changes how she sees herself and her entire life up to this point.
Of course, there is also the mandatory gorgeous Italian hunk and the cast of goofy supporting characters.
Again, there are some elements of the wildly unrealistic here (I would love to know how a girl who has lived her entire life in jeans and flip flops gets to Italy and within a day decides to spend weeks on end running through a Medieval city in 6 inch heels) but the plot moves along at a great pace, and the vivid descriptions of the beauty of Sienna really put me into the right mindset. Teh ending is as predictable silly as any Shakespearean comedy, but somehow even the sappy stuff works.