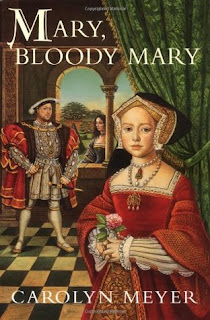 Today I'm going to be talking about a very good series for young people: Carolyn Meyer's "Young Royals" series, which tells the stories of three of the most famous women in the Tudor dynasty.
The first book in the series is Mary, Bloody Mary, which tells the tale of young Mary Tudor, daughter of King Henry the 8th and his first wife, Catherine of Aragon. The story begins when Mary is just a young girl, and begins to hear whispers around court that her father is in love with someone other than her mother, a mysterious woman called Anne Boleyn. Mary hates and Anne, and believes that she has bewitched King Henry into loving her.
The book takes readers through the period in which Henry's marriage to Catherine begins to dissolve, all the way through to the king's second marriage to Anne, and the eventual unhappy ending of that union, all told through the eyes of young Mary as she deal with becoming a servant to her own family, and goes from being first in line to the throne if her father should die, to being cast out as a bastard and removed from the line of succession completely.
It is an excellent introduction to the Tudor dynasty for kids ages 8 and up, and does a good job of making sense of what can potentially be a very confusing period in history. 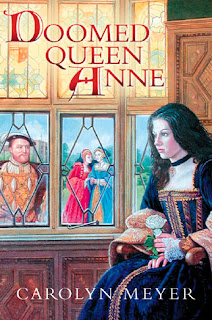 I continue my review of the series with what is actually billed as the third book in the set: Doomed Queen Anne.  I personally think the series makes more sense to readers if this book is actually read second, so I will be discussing it second.
By the way, if you need a "spoiler alert" for this one, you really should demand a do-over on your entire education, just saying.
Anyhow, this book is told from the point of view of Anne Boleyn, second wife of Henry the 8th and the catalyst for the great Protestant reformation that led to the creation of the Church of England as separate from the Roman Catholic church.
The tale begins when Anne is a young courtesan in the French court. She has basically been banished there by her family, to whom she is a great disappointment. They don't consider Anne to be as smart or as pretty as her sister, Mary, since Anne is dark haired and darker complected and has not only a nasty birthmark on her neck but also an extra little finger (historically true facts, by the way! Kudos to Ms. Meyer for throwing this in!). Mary, the pride and joy of her parents, is known by all to be Henry the 8th's mistress, and her parents encourage this because they are social climbers who hope to use Mary's status to move up in the world.
When Anne meets the king she is immediately smitten, and basically spends the rest of her young life trying to outdo her sister by not just becoming another one of the king's side-women, but by replacing the aging queen Catherine as the next queen of England. Of course, as we all know, she succeeds, but only temporarily. The book takes us through Anne's life up to the morning of her execution on Tower Green. 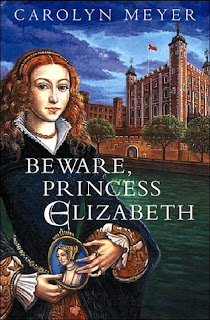 Third in the series is Beware, Princess Elizabeth which takes us to a time several years after the previous two books. Elizabeth Tudor, daughter of Anne Boleyn and Henry the 8th is now a young teen, and despite the fact that she is the child of the most hated of her fathers wives, she is still very much aware that she could someday rule the country.
The story begins with the death of King Henry and takes the reader through the strange and short reign of Henry's only male heir, Edward. The scheming of his advisers is explained, and we are introduced to Elizabeth's friend Jane Grey - who will also very, VERY briefly take the throne of England when Edward creates his own succession orders.
As we know though, poor little Jane only rules for nine days, and the bulk of the story focuses on the real danger Elizabeth faced during the frightening and bloody reign of her sister Mary. Elizabeth is taken prisoner on several occasions, and even has to pretend to be Catholic for a time, fearing her sister will have her burned at the stake as a heretic, as she has been doing to other Protestants.
The author does a very solid job of explaining the very strange and troubled relationship between the two sisters, and the dangerous and treacherous road Elizabeth walked before her magnificent 45-year reign.