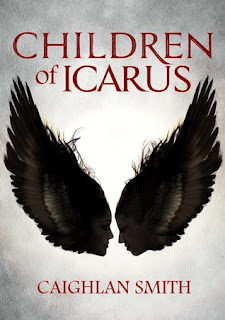 In the begging, there were Gods and there were Angels. The Gods were jealous of the beautiful Angels and so they tricked one young Angle, Icarus, by telling him that the sun was actually a gateway into the world of Gods. Icarus was horribly burned, but a woman, Daedala, took pity on him and buried him in the ground until such a time as his wounds could heal. To mark his grave she built a beautiful city of towers, and around this city, a labyrinth.
This is the myth that kicks off Caighlan Smith's upcoming title, Children of Icarus.  The full story begins many, many years later, in the society that presumably now thrives in that very city. It is a city that each year, chooses several children, all under the age of 17, and sends them into the labyrinth, with the promise that when they reach the center of the maze, they will be greeted by Icarus and turned into Angels. I think you can all sense just exactly where this is going, can't you?
Our major protagonist is almost 17, and incredibly relieved because after this year she never has to worry about going into the labyrinth, which she does not want to do, even though her society considers this a great honor, and most people, including her best friend Clara, desperately want to be chosen. Clara wants to go into the maze because years ago her brother Collin was chosen, and she wants to join him as an angel.
Of COURSE, both girls are chosen, and HELLO... absolute hell breaks loose the SECOND they go inside the maze. Clara is almost instantly killed by giant, scary, angry bird things and our protagonist BARELY survives.
Notice I keep calling her "the protagonist..." well, an interesting feature of this book is that we never learn the girl's name. She is also mute for almost the entire book, because even though she CAN talk, she is so horribly traumatized by the events of that first day that she very rarely says more than a few words.
I don't want to give too much more away, but the gist is, she eventually becomes a member of a group called Fates, made up of other kids who manage to survive their first few days in the labyrinth... but then THAT goes horribly, horribly wrong.  Then there is a shadowy, possibly mythical figure known as "The Executioner,"  and a whole mess of nasty, horrible monsters, most of them modified from real Greek and Roman mythological beasts. There's blood, guts, death and horror, and amazingly, this was all written by a 20 year old!
Caighlan Smith is TWENTY. Sheeeeeeeesh! I can't even.
I was HOOKED on this book almost from the word go, and the ONLY reason it is not getting all 5 bookmarks is because the ending of it destroyed my mind-hole by leaving SO MUCH STUFF unanswered (in the best way possible though, I promise!) and forcing me to wait goodness knows how long for the sequel!
The book is out August 1st and you can (and totally should) pre-order it from Amazon. I received the digital ARC from Netgalley in June, so I have to wait even LONGER than you guys to get my hands on a hard copy. Sigh.

Final Rating: 4/5 bookmarks for forcing me to wait for the next one to answer any of my billion questions!