As some of you may know (if you are a librarian, a parent or have recently ventured into a public library) each year libraries around the country feature a themed, multi-week program called the Collaborative Summer Reading Program, sometimes referred to as SRP or CSRP. There is a theme each year, and this year's theme was sports and exercise....

Well, it's not secret to anyone who has ever met me that I hate sports, so I decided to sort of blur the theme a little bit and create programs based around fun games, rather than sports. One of these programs was a live-action game of Clue. Several people have asked me to share what I did, so this post will cover that as best I can describe. Please feel free to post questions below and I will do my best to clear up anything that was confusing.

First off, I modeled a lot of what I did on the original game, but I wanted to give it a literary twist. I chose 6 characters from books I personally enjoy, 3 males and 3 females. They were: Harry Potter, Hamlet, Bilbo Baggins, Katniss Everdeen, Arya Stark and Dorothy Gale. I also chose 6 weapons which would have been used by these characters: the elder wand, poison, Sting (Bilbo's sword), a bow and arrows, Needle (Arya's sword) and a bucket of water. The locations on the board were the lands or places each of the characters came from or were deeply associated with: Hogwarts, Elsinore, The Shire, Panem, Winterfell and the Emerald City. Each location had a portal (specifically assigned to one of the other lands) and two doors. The center location on the board was my branch library, which also contained a portal to any land the player chose. I also printed and laminated dozens of footprint tiles, so in the end the board looked like this, but larger:

I created my own detective's notes sheets, which looked like this:
I also made a set of game cards, each featuring a weapon, location and character from a half-sheet of laminated card stock paper.  These were our playing deck.
On the day of the program, when patrons came in, they were given a piece of paper and a writing implement. I placed 2 jars on a table, labeled "male character" and "female character" and asked each patron to write their name on the piece of paper and put it in their preferred jar. I then picked 3 names from each jar and the patrons were able to pick their character in the order their names were drawn. Those who were not chosen to play characters were also given detectives notes sheets and were able to play along from the audience. In fact, 2 games were played, and in both cases, the winner was a member of the audience, not one of the live action charter roles.
At the start of the program I read a short story I had written about the murder that had occurred. It was a simple, one page thing which only served as a background to the game we would play.


The rules of the game were pretty basic, and somewhat modified from the original Clue game.

1. Each character starts the game in his or her own space. No weapons or character pieces need to be placed on the board. Instead I made pockets from pieces of card stock paper which the players could wear around their necks. The pockets had each character's picture and profile on them and the pockets served as a place where they could hold their cards.
2. A volunteer from the audience chose 1 card from each stack of character, weapon and location cards, which were placed in the secret envelope. The rest of the cards were shuffled together and distributed around to the character players.
3. Each character player rolled a giant die and the one with the highest number gets to go first. Game play then proceeds clockwise around the board. It is important to remind the players to be mindful and try to remember which character they play after.
4. First player rolls the die and moves that number of spaces. When a character lands on a location spot on the board, they can either a) choose to teleport to another location, b) make a suggestion on the murderer, weapon and location or c) end their turn and pass to the next player.
5. If a player chooses to teleport, their turn ends, but they can make a suggestion at the start of their next turn.
6. To make a suggestion, a character will choose another player and say something like "Bilbo Baggins, I suggest to you that it was Harry Potter in Panem with a Bucket of water." If Bilbo has any of the 3 suggested cards in their hand, they show ONE of them to the room. If not they can say something like "that sounds like a fine suggestion," or "that suggestion might be true."
7. Play continues this way until someone is ready to make an accusation. The accusation can only be made from the center square, and if the accusation is wrong, that player forfeits their right to make any further accusations.
8. A member of the audience may make an accusation at any time, however, though if they are wrong, they also forfeit the right to make any further accusations.

Additionally, I made sure to have prizes available for those who made correct accusations. I also prepared a small bag of candy for each of my 6 players. We ended up playing twice in one hour though, so I made extra candy bags just in case. Since my program was open to ages 8 and up, I made sure to have a mix of prizes that would appeal to tweens, teens and adults. I had a good mix of all age groups, including two complete families. Many of the prizes were ARCS, which were quite popular.

So, that's all I can think of for now. Again, if you have any questions on this program please comment below and I will be happy to answer you as soon as possible. Below are some pictures of the program for you to enjoy. All photos courtesy Vanna Bells. 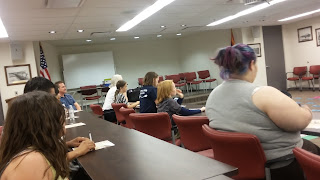 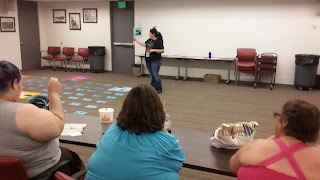 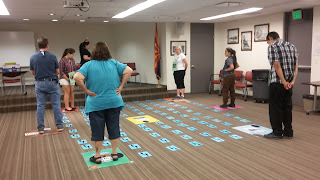 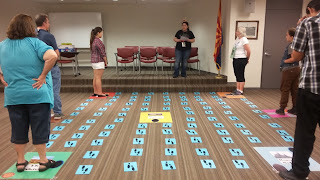 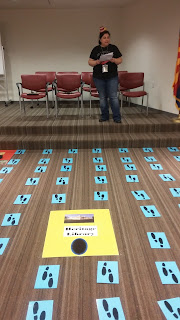