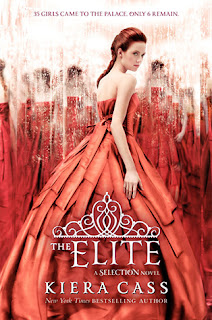 The Selection series by Keira Cass is one of the least dystopian dystopian novel series for young adults that I have ever read. I have heard it referred to as "The Hunger Games meets The Bachelor" on several occasions, but this is not accurate - what it really is, what it merely is, is  The Bachelor set in the future, if the bachelor in question were a prince.
So, if we think about the series as a reality show, the second book in the series, The Elite, would take place sometime in the middle of the season. Most of the girls have gone home, the home audience has chosen a favorite, and we can tell the bachelor in question is already starting to prefer a few girls over the others.
At this stage in the game, America Singer, our protagonist, is one of just a few girls still in the game, but she still can't decide if she actually wants to be. She still has feeling for her childhood sweetheart, Aspen, who also happens to work in the palace. On top of that, America shockingly gets to see first hand the brutal punishment that can be handed down in her society to those who break the laws. It happens to someone very close to her heart and it makes her question everything she has ever believed, while at the same time turning her into public enemy #1, as far as Prince Maxon's father is concerned.
At the same time, there are more attacks from the rebels, both Northern and Southern, and we learn a lot of secrets about how the country that was once the USA came to be in the state it is in in this vision of its future.
Overall, not as interesting a chapter as the original, but it still kept me reading, and it did make me want to move on to the third book to see how this all wraps up.