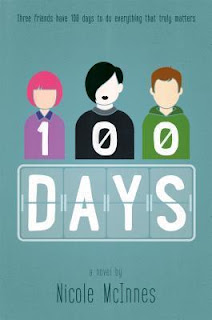 Agnes is a teenage girl who looks like 90 year old woman. She has Progeria, an aging disease that is making her old before her time. It also makes her abnormally tiny, and her bones are brittle, so it's very easy for her to get seriously hurt.
Fortunately, Agnes has an amazing best friend, Moira, the tall Goth girl, who has been Agnes' self-assigned bodyguard for as long the two can remember. Unfortunately, Agnes and Moira don't know it, but Agnes only has 100 Days left to live.
Enter Boone, a fellow student who was once friends with both girls, until a fateful day in gym class, when Boone did something stupid. Something that left Moira embarrassed and Agnes hurt. Now the three have been thrown back together, mostly against their will, and Boone has so many things to worry about already that he really doesn't need these two weird girls to worry about to: his dad is dead, his mom is basically a zombie and Boone's just trying to keep a roof over their heads and food on the table until she snaps out of it.
Nicole McInnes has done a beautiful job with this book. The format is perfect: it's told in 100 chapters each covering one day of life, switching points of view between all 3 of our main characters. Somehow in that span, the author manages to touch on themes of love, death, illness, fear, insecurity, family and basically just all the chaos and horror and beauty and insanity of being a teenager, let alone with with a rare, incurable, 100% fatal disease.
I won't lie, I cried, and you probably will too, but in the end the tears were not so much about the sadness of Anges' short life, but about the beauty of youth, friendship and love.

Final rating: 4/5 bookmarks. One of the best titles I have read this year. Very much recommended.