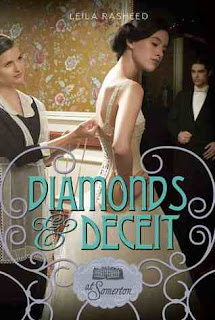 STOP reading if you have not read Cinders and Sapphires!

It's disgusting how addicted I am to this series, it really is. I am SO happy I was able to find book 2 of the At Somerton series on Hoopla Digital (thanks to my library having it available to patrons for free! YAY!) because it's kind of hard to find this in print. (The 3rd book is not even available in PRINT as I have now realized, but more on that later!)
Anyway, in case you don't know, Leela Rasheed's Diamond's and Deceit is book 2 in the At Somerton series, which I can best describe as Downton Abbey for teens. This is one of those books, where if you look at it closely, not much happens... and yet SO MUCH HAPPENS!
Since the end of book 1 (which is called either Secrets and Sapphires or Cinders and Sapphires depending on whether you read it in the UK or in the USA) house maid Rose Cliffe has learned she is actually LADY Rose, illegitimate daughter of Lord Westlake. Lady Ada, her half sister, is torn between a man she respects, but doesn't love and the real love of her life, a young Indian man named Ravi, and they have both gone with their new step-mother and step-sister (the wretched Charlotte) to London for their first "out" season as proper young ladies.
Meanwhile, back at Somerton, the girls step-brother Sebastian is sick with worry over his lover Oliver, who is being charged with a murder Sebastian committed.... not to mention all the drama being perpetrated "downstairs" by the staff and all THEIR secrets!

Final review 4/5 bookmarks, because I just could NOT put it down! And I hate myself for it in the best possible way.