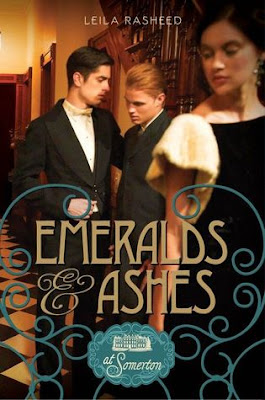 Leela Rasheed's Emeralds and Ashes is the final book in the At Somerton Series, which is often described as "Downton Abbey for teens." It is only available in e-book format, and there no plans to release it as a physical book.
I am so sad this series is over. It really has been a favorite of mine this year, and I wish it could continue some more. Now, be warned.... there are

SPOILERS FOR ANYONE WHO HAS NOT READ CINDERS AND SAPPHIRES AND DIAMONDS AND DECEIT!

Are you still here? Good. Isn't this series SO GOOD!!!!??? In this final chapter, World War 1 has officially broken out. Everyone at Somerton Court is being affected by it in some way - Rose and her new husband are trapped in Egypt with no way to get home to England. Lord Averly has enlisted in the service and has left the family.... and Sebastian is looking to the military as a way to escape the shame of being openly outed as a homosexual, which is not only frowned upon by society but actually illegal.
Meanwhile, Ada's relationship with Ravi is still in limbo and even snooty and obnoxious Charlotte's life is in a state of flux as she seeks out her own path and tries to pull away from her mother's influence and meddling.
Suffice it to say, it's all SO good. Just SOOOO good. A total and complete page turner! I was sad to finish it but I could not put it down!

Final Review: 5/5 bookmarks because I enjoyed this series so much! Sad to see it go!