The Sleeper and the Spindle 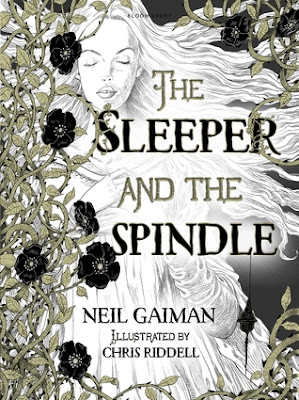 The Sleeper and the Spindle by the wonderful Neil Gaiman is a retelling of both Snow White and Sleeping Beauty with a feminist spin.
It begins a few days before Snow White's wedding. She is now a Queen, not just a princess, and she is starting to have second thoughts about becoming someone's wife. That is when her friends the Dwarfs arrive to let her know about a problem - in the neighboring kingdom, a princess has been cursed with endless sleep. This curse was originally contained to the neighboring castle, but now it is spreading throughout the land, and there is a real possibility that it will eventually spread into Snow's kingdom.
Snow decides to take on the challenge of finding a way to wake the sleeper, in order to prevent her kingdom from coming under the curse, so she puts her wedding on hold and sets out on an adventure.
The story is short and sweet, and is written in language that is easy enough for both younger kids and adults to appreciate the story. There is enough of a twist ending here to make it one of the more original fairy tale re-tellings also.