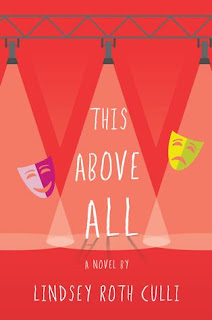 "This above all, to thine own self be true." It's one of my favorite quotes of all time, from my favorite author's favorite play. When Polonius says it to Laertes in Hamlet, it's some good fatherly advice. This book, Lindsey Roth's This Above All, explores what it's like to try to live up to that advice as a teenage girl.
Piper is your quintessential "good girl." She is the middle child in a large, very devout, very strictly old-school Christian family. In fact, her dad is her church's pastor. Piper has always believed in Jesus, and in all the things that her religion teaches her: including the idea that being gay is one of the worst things anyone can be.
Piper has always a model daughter and the apple of her father's eye and has never thought to rebel in any kind of way... until the day she decides to be a little bit adventurous and audition for the school play: Romeo and Juliet. Of course, she gets cast, but not as Juliet or The Nurse.... she gets the role of Romeo, which means she will not only have to dress as a man (and this is a girl who wears skirts and dresses EVERY DAY) but also kiss a girl ON STAGE in front of EVERYONE. Plus, if she wants to keep the part, she will have to lie to her father, who believes being an actress is pretty much being a whore.
In the process of auditioning, Piper begins to meet some new people. People who do not belong to her church. People who do not follow a Christian life style, people who drink, people who smoke, people who (GHASP!) have sex and even worse, people who are gay. The thing is, these people are pretty nice, accepting and all around kind of cool. Which makes Piper question why her church has taught her that these people are so horrible... and it makes her question if maybe the church has some things completely wrong.
Of course, the struggle of a teenager finding her own religious identity and coming to terms with her own beliefs about homosexuality is a massive topic to tackle, and this book is a bit of a simplistic view of it, but at least it presents a scenario that you don't often see in teen novels, and one that needs to be brought up in today's society. It's a good, solid effort to begin a dialogue.

Final Review: 4/5 stars, because these types of books really need to exist, and they need to be read.