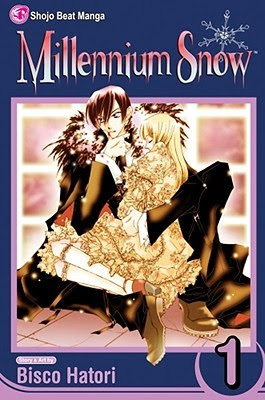 I picked up Bisco Hatori's manga Millennium Snow on a whim from a list of offered items from Paperback swap and the title looked interesting. I knew there was a vampire involved, and I do like vampires, so I thought what the heck.
This turned out to be pretty much Twilight, except set in Japan.
Chayuki is a girl who has known her whole life she would die young. She has a heart condition that doctors have always told her would kill her before adulthood. She is now 17 and getting much worse, and she is pretty certain she will not live to see the next snowfall (hence the title).
Toya is a vampire who refuses to drink human blood (sound familiar?) because he thinks vampire rules are stupid. You see, vampires his age are supposed to choose a human partner and drink their blood. This ensures that not only the vampire, but also the human will live for a thousand years. Toya thinks this is gross, and doesn't know why anyone would want to live for so long. Chayuki, who doesn't know why anyone WOULDN'T want to live so long desperately wants to be Toya's blood partner.
Eventually the two develop a grudgingly frenemistic relationship as Chayuki tries anything she can think of to get Toya to drink her. This relationship is complicated when a cute classmate of Chayuki's asks her on a date. This classmate is, of course, a werewolf.
Other than the obvious Twilight-ness of it all, the manga is not bad. Chayuki is literally a damsel in distress, but is also spunky and sweet and you end up REALLY wanting her to live. Toya is a total jerk, but a lovable her, and werewolf Satsuki is an adorable foil for him. There's even the mandatory cute animal sidekick.
It's definitely a teen or tween title though, not something that is likely to grab hold of the adults who pick it up.