Book Review: The Life After 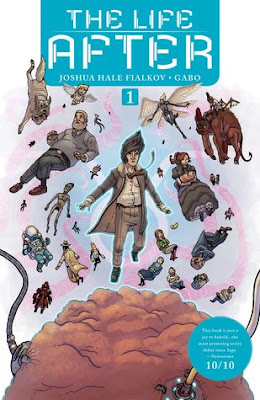 Joshua Hale Fialkov's The Life After is one of the most off the wall and weirdest graphic novels I've read in quite a while.
Our main character Jude has an extremely average life. It seems to him that all his days are pretty much the same. He's never even had the courage to talk to the pretty girl who rides his bus. And then one day he does talk to her. In fact he reaches out and touches her, and in that moment all hell breaks loose. Sort of literally, actually.
Jude can see into the girl's past, and ultimately realizes that all his days feel the same because they ARE the same - he is stuck in purgatory. The purgatory reserved for suicides, in fact. And he seems to be the only person there who knows this... until he runs into Ernest Hemingway. Yes, THAT Hemingway. Papa H is the only other guy in the place who is self-aware and knows he's in purgatory. Of course, once these two team up it causes a bunch of problems at the home office, which is a very corporate and soulless, kind of like Office Space but worse. And when Jude starts to figure out who he really is and why he is really in purgatory stuff really hits the fan.
God makes an appearance, (and WHAT an appearance God has! GROSSSSS!!!) as does a crazy shape-shifting hell-demon assassin bounty hunter. Oh and there's a cute dog! Because you have to have a cute dog! With artwork reminiscent of Chew (though less stomach turning), done by the super cool artist Gabo, it's totally worth checking out.
This one kind of blew my mind in a very cool way. Go read it!