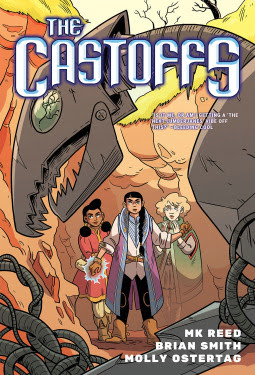 New series alert!! M. K. Reed's The Castoffs is going to be a popular one with tweens, especially tween girls!
The story begins in a futuristic society where many inhabitants are born with magical powers. Those who do not have magic have turned to machines - but now society in this world has gotten to a point where a great deal of resentment has been brewing between the magic users and the machine users, and a war has erupted.
Fast forward a decade or two and a grudging peace has been achieved, with the magic users having separated themselves from the machinists and live an work in their own guilds. That's where we stand where the real meat of the story begins - with three ethnically diverse mages  being sent to deliver something important to a neighboring guild. One of the girls is an incredibly skilled fighter, but kind of bossy and a pain in the butt. One girl is a bit of an outcast, because despite having the power to make herself invisible, she is also a total klutz who breaks pretty much everything she touches. And one girl is SUPPOSED to be an herbalist, but kind of sucks at making potions. (Of course, girl #3 has a cool secret.)
On the way to complete the mission, the girls accidentally stumble onto a dastardly plot that aims to bring machines back into power and destroy the magicians. Even though the girls don't really like each other very much, they realize they need to come together for the good of their people.
Beautiful illustrated, and snappily written this series is a great one for young girls (and there's plenty here the boys will like too!) and this is a really promising start. It just hit shelves on April 12th, so go pick it up!
Final Review: 4/5 bookmarks! Best new tween graphic novel so far this year!