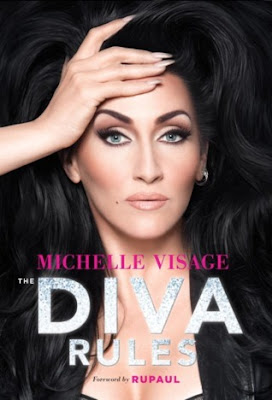 Michelle Visage, for those not in the know, is a judge on the best show on television: RuPaul's Drag Race.  She is also a former member of a 90's girl group (Seduction), and a radio personality. Her book, The Diva Rules is part biography and part self-help book: a list of rules for living a super diva-esque life as well as tales from her youth in the club and ball scene in New York in the late 80's and early 90's.
Despite the fact that Michelle is not my favorite personality (she is often mean and a bit abrasive to the competitors) I found the book a really fun read. Michelle writes exactly the way she talks, which made me happy, because often you can tell a ghost writer has tried really hard to make the person seem a lot smarter or more articulate than they are. Not so here, where Michelle's sassy New Jersey personality pops out of every single page. She is also extremely open and honest about her past, including her experiences with plastic surgery, bisexuality, depression and being adopted as well as finding her birth mother as an adult.
The book reads quickly and it's peppered with really good, sensible advice as well as fin family pictures and pictures of Michelle with RuPaul and some of the other Drag Race girls. I definitely recommend it to fans of the show, as well as fans of sassy broads without a filter.