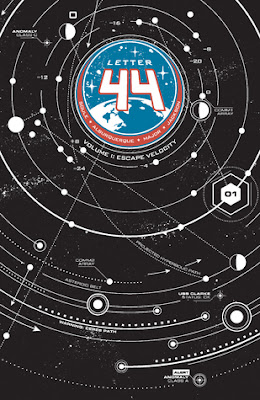 The premise: it is the day after Inauguration Day and President-Elect Blades has just become our 44th president (in our world, this would be Barack Obama). In his new office is a letter (Letter 44) from President #43 (in our world George Bush Jr.) that reveals a horrifying secret: the president basically created the war in the Middle East in order to distract America from a much more horrible truth. The country has discovered evidence of alien life, and the aliens seem to be building a massive something in space, which is likely some sort of weapon.
President 43 used the war as cover to train soldiers and pump money into defense in case these aliens really are planning to nuke us into oblivion. He has also sent a team of scientists and soldiers into space to retrieve intel on the contraption... on what everyone involved assumes is a suicide mission. Oh, and one of the ship's crew is pregnant. President Blades now has to figure out what to do: does he tell America the truth and risk a panic? Keep quiet and risk word leaking out and being labeled a liar? Prepare for war? Whatever he decides, the only thing that is certain is that everything is uncertain, but a decision needs to be made and quickly.
The story alternates between Blade's point of view and the point of view of the crew on board the recon ship which adds a nice dimension to the story. The artwork (by Alberto Albuquerque) is excellent, except for the aliens, which when we finally see them are... let's just say underwhelming.
I still haven't decided if I want to continue with the story, but it's an interesting take on politics at the very least.