Book Review: Only Ever Yours 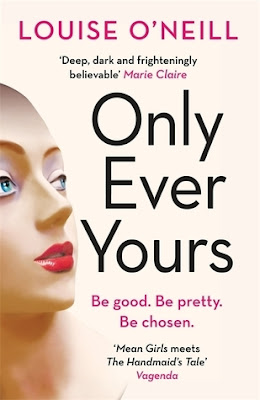 I had to take several very deep breaths before starting this review. That is because as a woman, Louise O'Neill's Only Ever Yours is one of the most disturbing books I have read in a long while, and it is difficult for me to accurately explain WHY this is without spoiling major bits and pieces but here is my attempt.
The story is set sometime in the seemingly not so distant future. Untold events prior to the book's beginning have rendered the population infertile, and made the world a completely barren and desolate place. Freida, our protagonist, is one of the few young women in the world, bred in a lab to be almost genetically perfect and raised completely within the confines of an all-girls "school." Her entire purpose in life is to be beautiful, desirable and popular, so that one of the few young men her age (all sons of prominent figures in this society) will choose her as either a wife, or a concubine. If you're not chosen for those two roles, you are forced to become a sexless and celibate teacher. So far, Freida has been doing this very well - she is among the top ranked girls in her year (ranking are determined by near constant posting to social media and their feedback from boys). Freida's best friend Isabel has also being doing well for herself, until this year when Isabel does the absolutely worst thing any woman in this society can possibly do: she starts gaining weight.
That's only part of what makes this world so disturbing. It's basically the worst high school experience you can imagine but magnified. Every single one of the girls here has severe issues. Eating disorders are considered a good thing, and the only classes the girls actually take are things like building nice outfits. There's even a class where your "friends" are encouraged to tell you everything they hate about you as a way for your to "improve."
When the boys finally arrive to make their selections everything gets about a million times worse. The girls who want to be wives have to tread an EXTREMELY thin line so as not to be considered either too cold or too slutty, while some of the girls just completely chuck the hope of being a wife and just start being completely promiscuous, their theory being that being a concubine is better, because you get killed sooner and don't get ugly. Oh yeah, did I mention that most wives get euthanized at about 35? After loads of plastic surgeries of course, because being old and ugly is worse than death. And the husbands just go back to the schools and pick out new, better wives... 16 year old ones. Because that's how old these girls are. SIXTEEN.

I just.... can't even. This was horrible. HORRIBLE, It was also the best book I have read so far this year. Though I have to say, I put it down and walked away several times. Read it. It's awful.