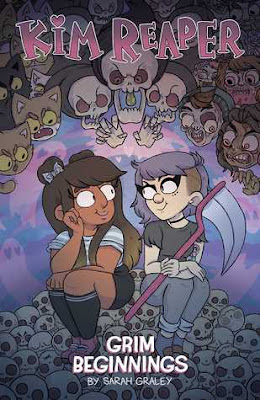 Sarah Graley's new Kim Reaper graphic novel series is a promising new title for the tween and teen set.
The story revolves around Becka, an adorably dorky University student who is mega-crushing on Kim, a cute Goth girl in one of her classes. Becka has never even spoken to Kim but has decided they are meant to be, and finally works up the courage to ask her for a drink down at the pub when she sees Kim whip out a GIANT scythe and open a portal to who knows where. Becka follows and realizes that Kim is a part-time Grim Reaper.
A series of hilarious adventures follow - including an attempt at reaping the soul of a cat owned by a crazed, steroid-using body builder (because Kim is only part-time she can only reap animal souls). But, when Kim breaks the rules and gets in MAJOR trouble with her bosses, Becka needs to decide if this potential relationship is even worth it. Meanwhile Kim learns a big mistake she made could cost her not only her job but her life (if you get fired from reaping, you're fired from LIFE) UNLESS she reaps Beka! Drama ensues!
The only negative I have here is that the art style is really juvenile - and the story is so cutesy that the story would probably most appeal to tweens... but the characters are all University students who party hard and drink a lot, and that aspect probably would not appeal to a tween audience. I do think it's a promising start to a series that shows a lot of potential - and the fact that the main characters are a bi-racial lesbian couple is definitely a refreshing aspect that will definitely appeal to younger LGBT-etc. girls who want (and need) these types of positive role models.

3/5 bookmarks! Loses points for the visuals not really matching the character backgrounds.