When I first started working within my current library district, we hosted a district-wide Peeps Diorama competition in the style of the Washington Post's annual contest. At that time the adult programs were run by a lovely woman named Mimi. She has since retired, but I still keep in touch with her through the magic of Facebook.
At the time of Mimi's retirement, her job functions were taken over by someone new who was... let's say "less enthusiastic." She decided to let the annual contest die, and I have always been a little sad about it, because it was one of my favorite events, and one of the few things we participated in as a district. (Because it was a completely anonymous judging, even employees and their families were encouraged to participate).
This year, I said to heck with it and decided to bring the contest back within my branch. I asked Mimi for some input, and got great advice from other libraries that have been holding their own versions of the competition to come up with guidelines and now I am just sitting around hoping some dioramas actually get turned in!

The guidelines are quite simple:
1. The theme is Peeps in Literature so all dioramas must be somehow based on a book.
2. All parts of the diorama are to fit within a maximum 14" X 16" box.
3. The scenes depicted must be appropriate for all ages.
4. The title of the diorama must be somewhere on the front of the box, and Peeps related puns are highly encouraged.
5. One entry per person or group, by which I specified that someone is welcome to turn in an individual entry IN ADDITION TO participating in a group entry.
6. 5 people max per group entry.
7. Judging will be blind, so upon receiving them, each entry is given a number.

The entrants also have to turn in a form with the names of who made the diorama, the title, their age or ages, a phone for contact and note with category they are entering into so I can contact them if they win something.

The categories are:
Children age 12 or under
Teens ages 13-17
Adults ages 18 and older
Group.

One diorama will also be crowned Peeple's Choice through later voting by patrons. I have made cute little certificates and have a few small prizes for the winners. I even made a super slapdash simple diorama as a sample. Can you guess what book it's based on? 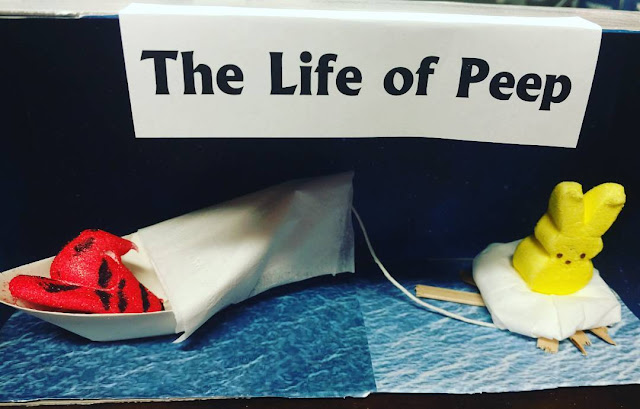