I mean, SO SUPER COOL.

It can also be an expensive hobby, and is still new enough technologically that you just don't see 3D printers very often. Where I live, the library is the one place in town where you can actually see one working live and in person, and while ours are not available for public use, they are available to use for programming, so I decided to introduce my teens to ours by getting them involved in designing their own items to print.

The only requirement to participate in the program was that the teens had to have an e-mail address (which most do for school, though some used a parent's e-mail) so that they could set up their own account on TinkerCad.

For those who are not familiar, TinkerCad is a free, online Computer Aided Drafting program that allows anyone to create STL and OBJ files of three dimensional objects. These files can then be translated or "sliced" for use in 3D printers, allowing anyone to create their own designs of anything they want, really. The homepage looks like this:

Once you have created an account, the website has convenient and easy lessons that help you learn how the system works. For our program I went over a couple of these very briefly with the teens, but since most of them were accustomed to programs like Word and MS Publisher, we found it easier to just dive right in and learn through trial by error. TinkerCad has a fairly simple drag and drop interface, so the biggest hurdle faced by most of the teens was trying to think three-dimensionaly and to think about how their items would look in the real word once they were printed.

For our first session, we had 9 teens in attendance, and since the class only ran for an hour or so, only 4 of them were able to completely finish a project to their satisfaction. I downloaded these four projects to a USB and am currently in the process of printing them out for the teens to pick up at their leisure. I also created a Thingiverse profile for our teen department where we uploaded the projects under Creative Commons licensing so that others can then download and print them as well. The teens got a kick out of thinking other people could print their creations.

Book Review: You Can't Just Kiss Anyone You Want 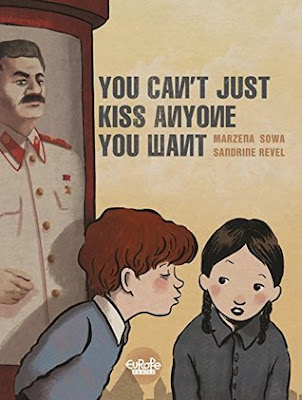 This little gem has been out since 2017 but I just discovered it at the beginning of this year. Originally a European graphic novel, You Can't Just Kiss Anyone You Want by Marzena Sowa is only available in an e-book format in English at this time, and you can get it on Amazon.
I know, it looks like a kids book - but this story is definitely not for kids. Set in Stalin-era soviet Russia the story contains some harsh truths as seen through the eyes of a little boy, Viktor, who ties to kiss a cute girl during a movie. While being questioned about why he would do such a thing, Viktor's friends quickly begin to turn on him, telling the adults in their world secrets that could bring down Viktor's family.
You see, Viktor's father is a writer, and he may have writings in his possession that are definitely not allowed by the government. As we peek into Viktor's family's life as well as the lives of his principal and most poignantly, his teacher, we see why in the Stalinist government, you REALLY can't just kiss anyone you want.

Warning: while it is not graphically represented, there is a suggested rape/sexual assault in this work.

Giving it 3/5 bookmarks due to its heartbreaking story and beautiful artwork. It loses points for just plain being too short.

Posted by Elia Juarez at 9:00 AM No comments:

Well, it's been a while hasn't it? Just under 5 months, to be precise. I have good, and fairly valid reasons though - I promise.

First of all, I have been getting used to my new job in teen services, so that has taken me some time. Tied to that is the fact that one of the first tasks I had on my plate when I took the new job was to launch a teen blog for my library district. You can check it out at TeenXing, it's pretty good. We feature works by our teens as well as book reviews and program updates.

Not only has the new work stuff kept me busy, I have also been struggling with some pretty serious health issues over the past couple of months. I've been diagnosed with a couple of autoimmune disorders, I had a cancer scare, and both my fiance (Oh yeah! I GOT ENGAGED PEOPLE!) and future mother in law have been very ill as well.

To top it off one of my dearest friends passed away very suddenly just a few weeks ago, leaving behind two college age kids and a terminally ill wife, which was just really crushing to all those who knew and loved him. He loved my blog though and was one of the people who kept asking why I had stopped, so I am getting back on track in part for him.

New book reviews are coming, new programming posts are coming, and probably a few posts whining about how crappy I feel and why life is rough right now. Librarianship is still the best job ever though, and I am so glad to share this blog and all my crazy adventures with all of you.

See you in the stacks!