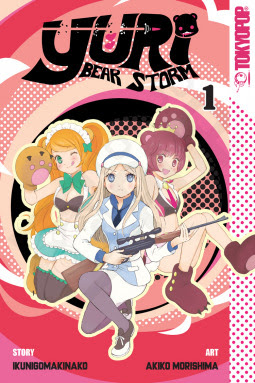 I am still trying to process Yuri Bear Storm by Kunihiko Ikuhara. I have to admit, this one is weird even by the special standard for weird by which I judge anything from Japan. See if you can keep up with me here ok?
There are some high school girls.
Except only one of them is actually a girl.
All the other girls are bears, because EVERYONE on Earth is a bear, except for some reason our protagonist Kureha who is a human. Kureha is kind of psychic, and very plain, until... wait for it... she takes off her pony tail and glasses and turns out to be drop dead gorgeous.
Ginko, who Kureha is kind of obsessed with, is the head bear, but no one knows she is a bear EXCEPT Kureha because of the psychic thing - BUT even though Kureha is psychic she somehow does not realize that all the women in this series are lesbians (I mean, it's called YURI Bear Storm - so duh!)
Ginko's mother, who is a weirdo recluse artist having an affair with her own sister in law wants Ginko to kill and eat Kireha because.... that's what you do when you love someone! You cannibalize them!
Despite the fact that this is one of the most bonkers manga titles I have ever read, I still give it decently high marks on account of the character design being absolutely beautiful and the fanservice not being TOO fanservicey. (Though there is quite a lot of that, and these girls are, if you will recall, all 16-year old high school students).
Volume 1 is out now, Book 2 is scheduled to drop in early March.