Book Review: Rise of the Zelphire - Of Bark and Sap 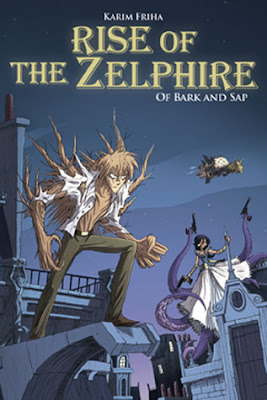 Legend says there are sprits that live inside every human. Things that happen to you in your childhood - particularly trauma - can awaken these spirits inside and turn you into either a Zelphire (a good spirit shifter attuned with nature) or a Dreghan (an evil spirit of death and decay).
In Rise of the Zelphire we meet Sylvan, a college student whose life with an abusive father turned him into a tree-like Zelphire with incredible strength. He has just been chosen for his dream internship - working alongside world famous botanist and adventurer Professor Wernes. Unfortunately one of the Dreghans has a serious vendetta against the Professor, and has also been hunting Zelphires down in the hopes of reclaiming his lost love. When the Dreghans kidnap the professor and some very young Zelphire kids who have befriended Sylvan and the professor's adopted daughter Seraphina, they launch a daring rescue.
With beautiful steampunk-inspired art, a colorful cast of characters and a lot of good old fashioned action, the book really has something to please everyone. Though there are some dark elements including some gross looking zombie mummy things (as well as some implied sexy-times) the story should be just the ticket for older tweens and younger teens. And, although it was originally published in French, the English translation is pretty solid, without awkwardness in the language or "lost in translation" moments. The English version drops on March 26th (tomorrow!) so grab it as soon as you can!