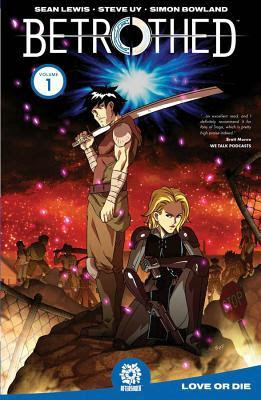 The choice: have sex with a guy you just met, or fight that same guy to the death. Either way, your choice will decide the fate of the entire universe.
This is the premise of Sean Lewis' and Steve Uy's Betrothed a terrific new graphic novel series.
Kieron and Tamara are the cursed couple: the only orphans at their school, they have known each other since they were kids, but don't really KNOW each other. Then one day, just before they both turn 18, Tamara starts having weird feelings towards Kieron - a mix between wanting to jump his bones and tear his spine out through his mouth type feelings.
As it turns out, neither Kieron nor Tamara realize they are actually the figureheads of two warring alien races. Kieron's people are a little more earthy and fight with weapons like swords while Tamara's are ultra high tech and sport fancy guns and power suits. Also, the fate of both of their races totally hang on the two teenagers, since they have been betrothed since before their birth, and they need to decide to either consummate their betrothal (thus ending centuries of war) or battle it out Mad Max style to the death - winner take both kingdoms.
Of course everyone around them has their own agenda. Kieron's people want them to bang in the name of peace, Tamara's people want blood, and there are double agents on each side with their own agenda. Tamara is just pissed no one asked her what she wanted, and Kieron pretty much wants to get laid.
It's a fun and promising start to what could end up being a very good series. 4.5 bookmarks!